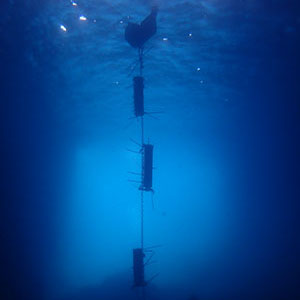 4Oceans measures key environmental parameters, including temperature, pH, and photosynthetically active radiation (PAR). The calibration of pH sensors is performed using spectrophotometric determinations. Dissolved inorganic carbon and total alkalinity are measured and used to calculate other parameters of the carbonate system. 4Oceans benefits from the long-term time series of hydrological parameters to characterize the physical and chemical structure of the water column in Villefranche-sur-Mer, named as “Point B” (www.somlit.fr/villefranche). This historical series started in 1957 and since then, weekly oceanographic data has been collected at different depths. In addition, temperature loggers are set along the water column (5 to 40 m depth) to establish thermal profiles, to quantify anomalies and marine heatwaves. The temperature data is integrated into the T-MedNet observation network (www.t-mednet.org).

High precision pH sensor
in the Bay of Villefranche 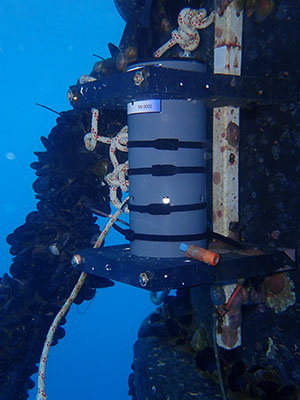 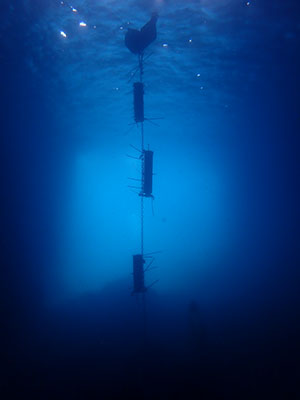 High precision in situ pi-Sami Sunburst pH sensor in the Bay of Villefranche, to measure seawater pH and its variability (www.somlit.fr/villefranche).
Deployment of 3 pH sensors to quantify variation in pH at 2, 3 and 4 m depth (For more info: onlinelibrary.wiley.com/doi/abs/10.1111/gcb.15372). 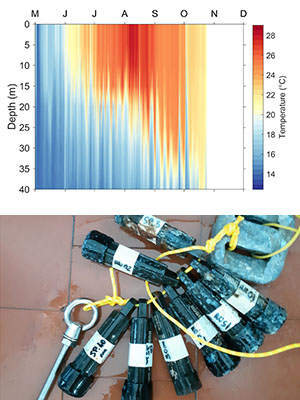 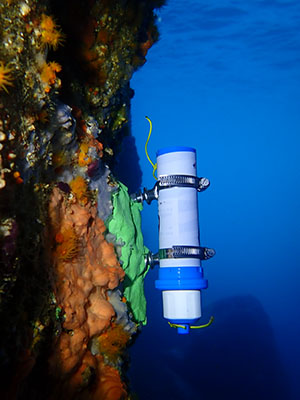 Temperature loggers are set along the water column (5 to 40 m depth) to establish thermal profiles and to quantify anomalies and marine heatwaves. The temperature data is integrated into the T-MedNet observation network (www.t-mednet.org).
Photosynthetically active radiation data loggers are deployed to monitor the solar irradiance conditions in the study sites. 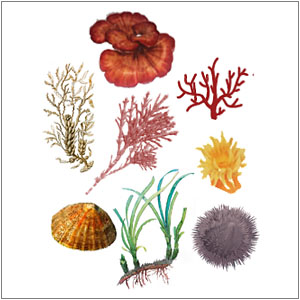 We are interested in improving our understanding of the emergent effects of marine heatwaves and ocean acidification. We use a functional-trait approach to quantify different components of functional diversity of benthic marine assemblages. Functional traits are defined as those traits that directly influence an organism’s performance. Examples include growth forms, solitary vs. colonial life histories, seasonality, size ranges, feeding characteristics, presence or absence of calcareous skeletons. Specifically, we sought to answer the following main questions:

2) Which critical functions of species are most at risk?;

Biodiversity loss (taxonomic and functional)
along the pH gradient

Intersection of the three functional volumes
among pH zones 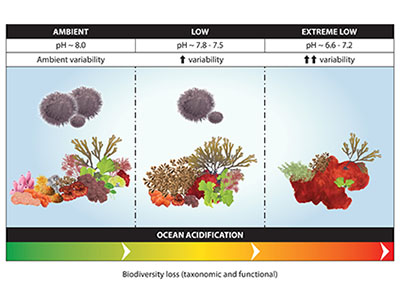 Based on species cover and the functional entities (unique combination of functional traits), we linked species loss to shifts in functional diversity and redundancy following the acidification gradient. Our analyses highlighted the life-history traits that are more vulnerable to ocean acidification such as such as tree-like and massive forms, long-lived and slow-growing life histories, heterotrophic feeding strategies and calcification". For more info, www.nature.com/articles/s41467-018-07592-1.
Functional richness is calculated as the volume inside the convex hull surrounding the functional entities (e.g. groups of species sharing the same trait values). Functional β-diversity equals zero when the portions of the functional space filled by species assemblages are perfectly overlapping, and equals unity when assemblages do not intersect in that functional space. 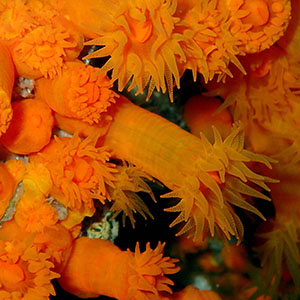 Despite large-scale climate and oceanographic extremes, high local variation in physical and chemical ocean properties can create microhabitats that are potential locations for climate-adapted populations. Corals are of particular concern because they are produced by the accumulation of calcium carbonate. Coral calcification is expected to decrease as seawater acidity increases. Corals create habitats for many species, enhancing biodiversity, playing fundamental ecological roles and sustaining ecosystem processes and services such as fisheries, coastal protection and tourism. We focus on two Mediterranean corals of great conservation relevance: the zooxanthellate species Cladocora caespitosa and the non-zooxanthellate species Astroides calycularis. Specifically, we address the following questions:

1) How species will resist escalating marine heatwaves and ocean acidification?;

2) Can we identify population that may be more tolerant to warming and ocean acidification? 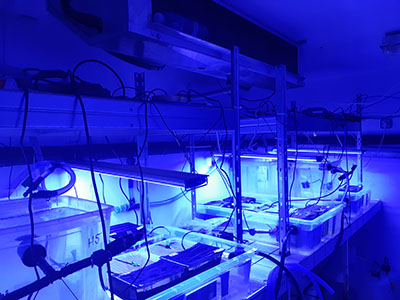 We combine field surveys and laboratory experiments to understand the underpinnings of coral tolerance to warming and ocean acidification. 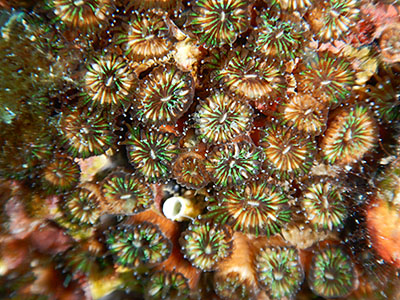 The coral Astroides calycularis is an azooxanthellate scleractinian colonial coral endemic to the Mediterranean, characterized by the bright orange color of its coenosarc and polyps. A. calycularis is commonly found in the southwestern Mediterranean Sea and can be highly abundant in dim light shallow rocky habitats. Because A. calycularis is a calcifying and long-lived species with low dispersal capacity, and found in the CO2 vents, it is a great model system for investigating variation in local climate phenotypic plasticity and adaptation (onlinelibrary.wiley.com/doi/abs/10.1111/gcb.15372)
The zooxanthellate coral Cladocora caespitosa it is the unique zooxanthellate reef-building coral at present time in the Mediterranean Sea and large bioconstructions are very rare. C. caespitosa hosts endosymbiotic algae, commonly referred to zooxanthellae. These microscopic algae require irradiance to perform photosynthesis and their photosynthetic products contribute to the energy budget of the coral host. 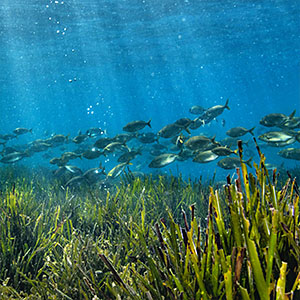 The only comprehensive solution to climate change and ocean acidification is to rapidly decrease anthropogenic emissions of CO2 and other greenhouse gases to the atmosphere (GHGs) (e.g. mitigation) and enhance the sinks of CO2 and the GHGs to avoid the impacts in the long term. We endeavor to do science that can contribute to assess the potential and capacity of marine macrophytes to act as biogenic refugia against ocean acidification. To this end, we evaluate the level and potential of pH buffering of selected macrophytes, which can help to local mitigate ocean acidification by short- (e.g. local modification of pH through net photosynthesis) and long-term (e.g. carbon sequestration) removal of CO2. 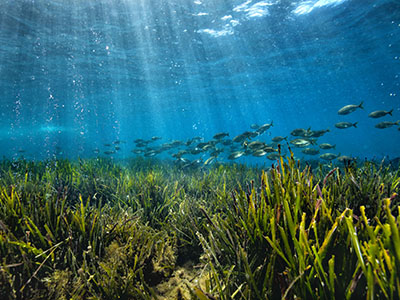 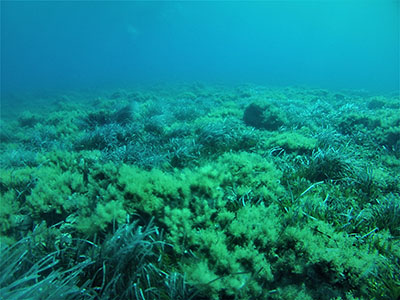 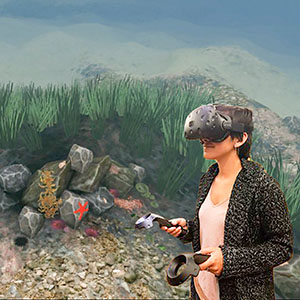 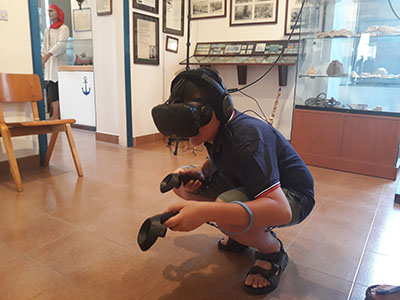 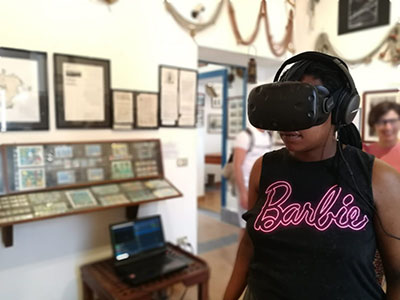 The Virtual Human Interaction Lab at Stanford University (vhil.stanford.edu) (with Jeremy Bailenson vhil.stanford.edu/faculty-and-staff and Fiorenza Micheli michelilab.stanford.edu/micheli) produced two innovative virtual reality experiences of the natural CO2 vent systems around the Castello Aragonese, Ischia. “The Crystal Reef - a 360 VR experience” explains ocean acidification through the CO2 natural vents at the Castello. This film was premiered at the 2016 Tribeca Film Festival in New York. “The Stanford Ocean Acidification Experience” can now be download for free vhil.stanford.edu/soae. This virtual experience allows first-hand observation of what coastal reefs are expected to look like by the end of the century if we do not curb our CO2 emissions.: 4Oceans has taken the virtual system into museums, classrooms, and “Week of Science” events. If you are interested in this technology, read more here vhil.stanford.edu/temp/2015/sustainable-behaviors, and here e360.yale.edu/features/can_virtual_reality_emerge_as_a_tool_for_conservation.
Scroll to Top